Hello, my name is Debra Lynn. I live in Port Alice with my partner, James, two cats named Pepper and Mr. Magoo, and an adorable little Chihuahua named Chloe. Port Alice is a village with a population of 500 situated at the northern end of Vancouver Island. In one respect it is your average small remote BC town with bare bones amenities of a grocery store, a gas station, a convenience store, a campsite, a hotel, a Royal Canadian Legion, a library and a thrift store. Not much happens, life moves slowly and everybody knows everybody. Port Alice was a much larger town once upon a time -- with a population nearing 2000 -- in its heyday in the seventies when the mill was going strong. Now the mill, almost a century old, is having trouble competing in the new millennium. It went through a series of curtailments since the eighties and eventually declared bankruptcy in 2004. Shortly after getting new owners in 2011, it went into a production curtailment with no real promise of getting back to full service anytime soon. The town has emptied out, and those who are left have to work out of town, even out of province. A lot of people are down in the dumps, missing the days when half the population had whopping big paycheques. It’s as if the town has become “Nowheresville” to many of the residents. 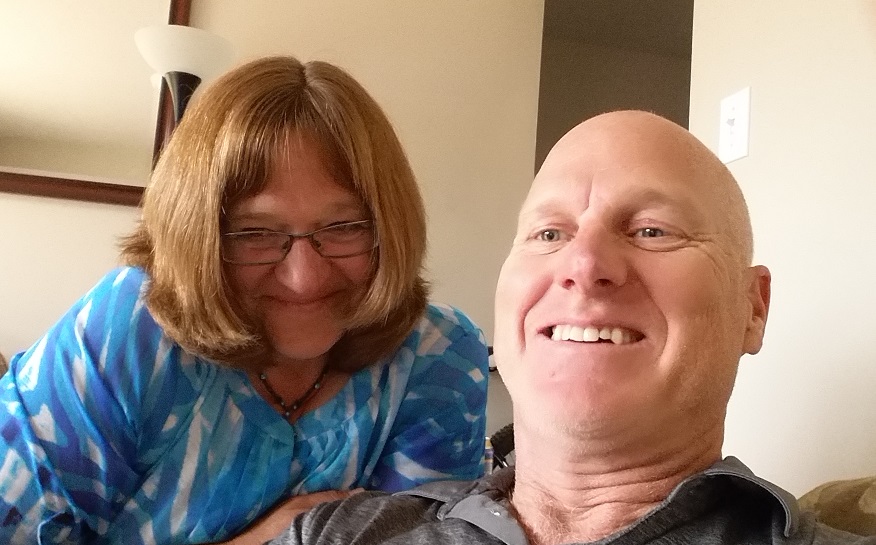 In another respect, Port Alice is a gem—a potential tourist hotspot like Banff or Jasper. When you see the view driving into town, you can’t help but gasp as the beauty of it….even if you’ve lived here for a few years! Nestled in a mountain side on the shores of the Neroutsos Inlet, practically every house in the village has a “million dollar view.” Although there is the mill, it is 5 kms from town and very much out of sight. Close to the east shore of the inlet is a grouping of islands called the Frigon Islands that remind me of those famous photos of Spirit Island on Maligne Lake in the Rocky Mountains. It is not uncommon to have a bear or even a cougar walk through town. An eagle flying overhead is an everyday occurrence. If you go down to the water, chances are you will have a close encounter with some kind of aquatic life, whether it be birds, a seal, a sea lion, a sea otter, even an orca or a humpback whale! Look into the water from the dock and watch schools of fish, crab, starfish and jellyfish going about their business. If you happen to be into kayaking, call Port Alice paradise! 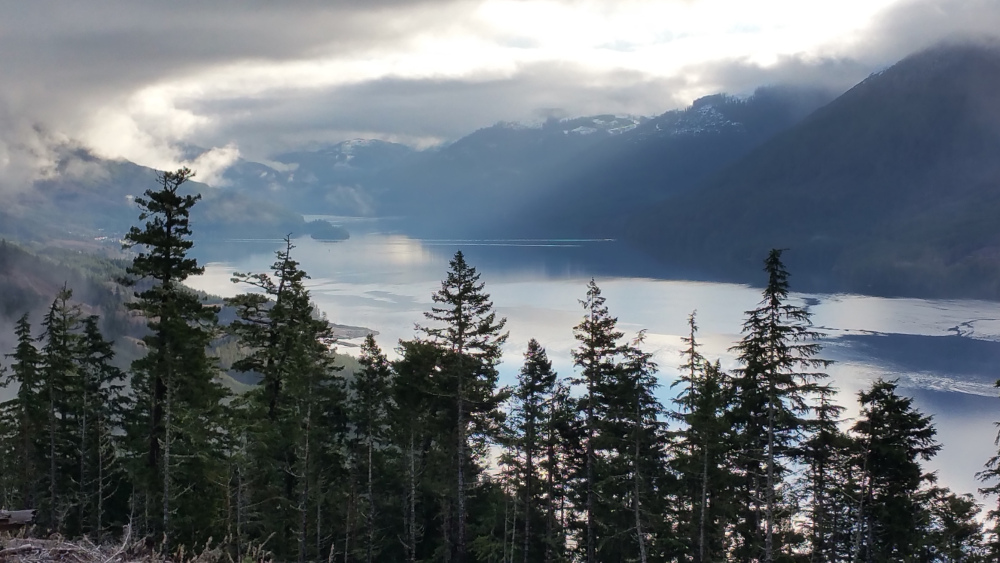 Not only can residents like ourselves hop into our kayaks from the shore of the town for a paddle in majestic scenery and natural wonders, but the surrounding area holds a multitude of potential kayaking adventures. You can take the logging roads to the Wild West Coast and visit pristine sights like Side Bay, Gooding Cove, Harvey Cove, Brooks Peninsula and Klaskino Inlet to name a few. Visitors and traffic to those areas are so infrequent and they look so untouched that, when you get there, you might feel like you discovered them! Cradled in the mountains and a short drive from Port Alice are Alice Lake and Victoria Lake, with a well maintained campsite at Link River that joins the two bodies of water. The Neroutsos Inlet is a south branching arm of the Quastsino Sound. Looking at my map of the Quatsino Sound on my wall, I see enough coves, inlets and islands that would take many life times to explore! At the end of the sound is the Quatsino Narrows leading into the Holberg Inlet. A little larger than Neroutsos Inlet, it too has enormous potential for kayaking exploration. On the Port Hardy side of the island there are places like Storey’s Beach for an easy paddle and God’s Pocket Provincial Marine Park for the more ambitious kayaker. In the Port McNeill area are the Broughton and Johnstone Straits—popular areas for whale watching. To the south of Port McNeill is a grouping of lakes, including Nimpkish Lake and Huson Lake with the Little Huson Lake Cave Regional Park. These places are but a few examples where the possibilities for kayaking adventures are virtually endless! 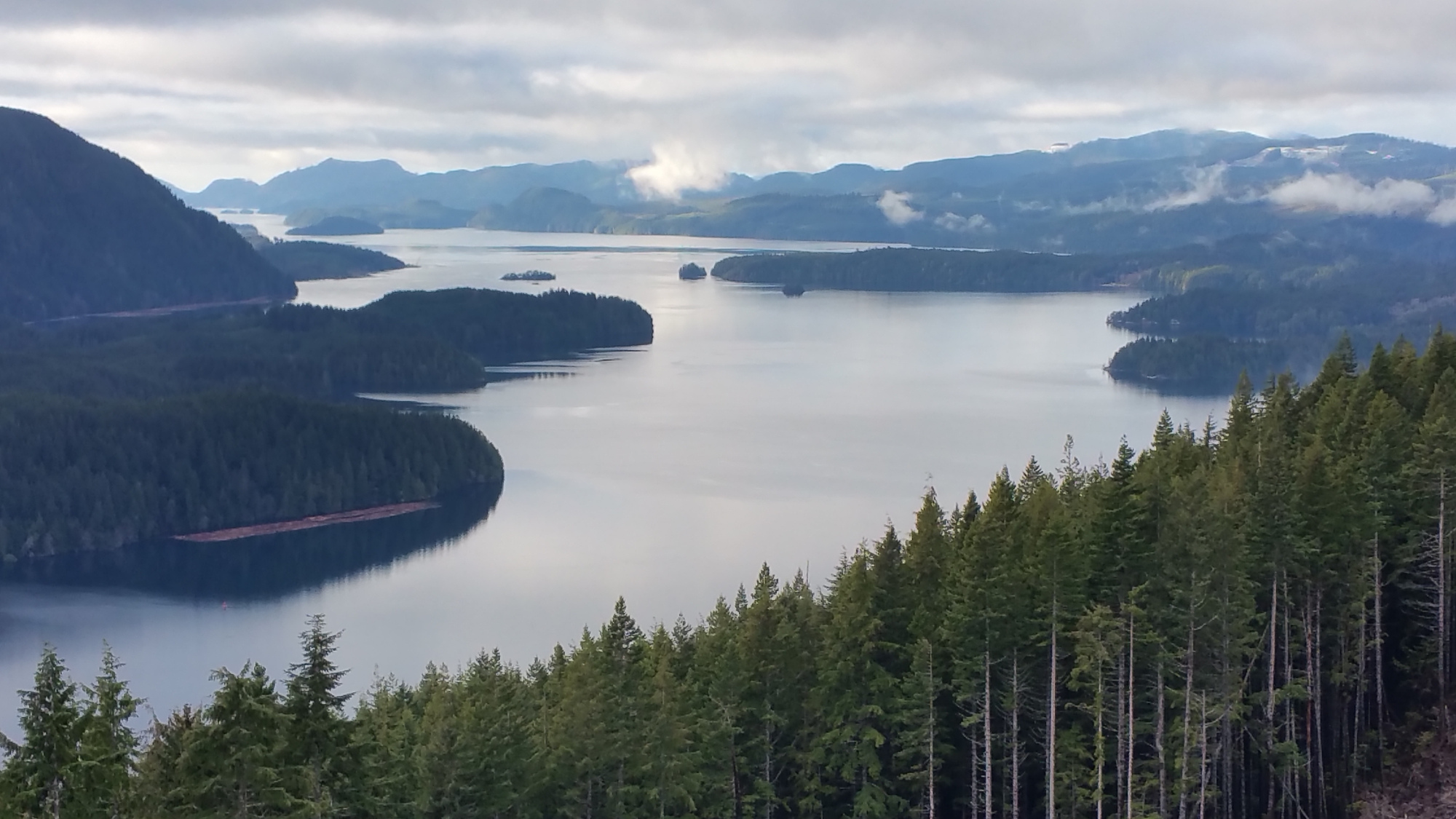 I came to Port Alice in 2010, to get away from crowds and cities and focus on my writing. I ended up buying a very cheap fixer-upper condominium, paying about a quarter of the price of a similar house in any other part of the country. Even though the interior of the house was a seventies decore eye-sore, I was sold on the long balcony with an ocean and mountain view! In 2013, I self-published my first children’s picture book, Marshmallow, and have started illustrating a second picture book. I met my partner, James, in 2014 even though we had both been living here since 2010. At a darts tournament at the Legion the gods were up to something, as we got paired up as a couples’ team from names drawn out of a hat. We didn’t get into the finals, but I did win a turkey for highest women’s score and then we scored each other’s phone numbers and the rest is history. Both James and I have always been quite active throughout our lives. We both contemplated getting into kayaking at some point in the past but never got around to it. Although I’ve worked as a forest fire lookout for 18 years and am pretty brazen about trudging through the bush by myself, being that I was a “prairie chicken” (ie. from Alberta), I didn’t think I had enough “ocean instincts” to kayak on my own. Not long after meeting each other, we plunked down some money for a couple of second-hand kayaks and started paddling like we knew what we were doing. 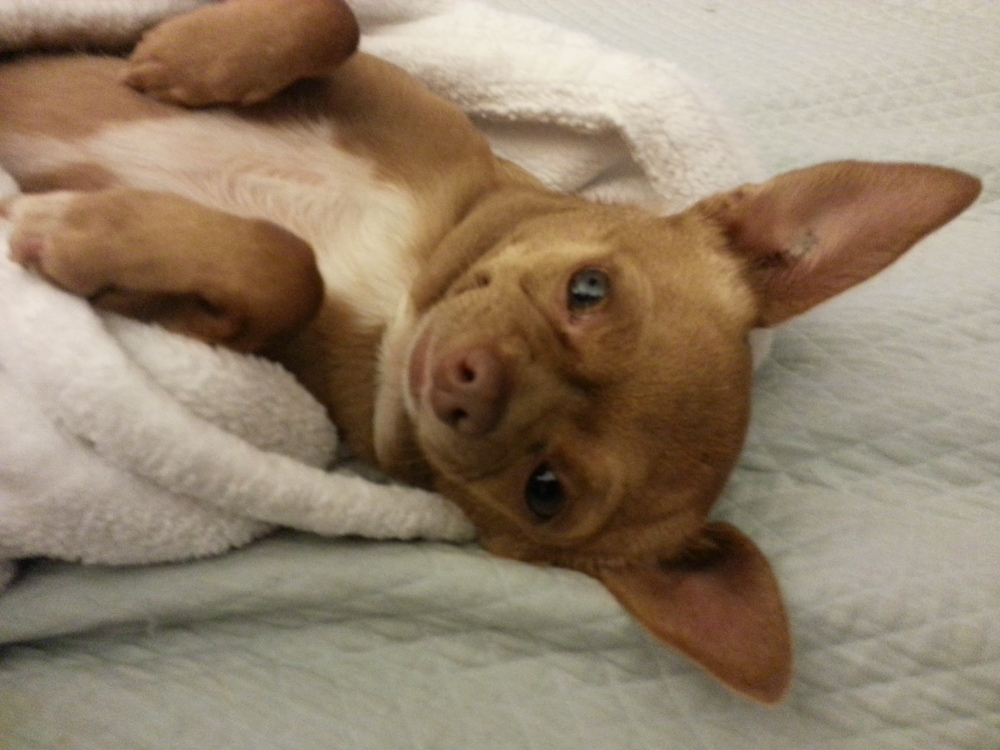 Chloe: cute as a bug in a rug. 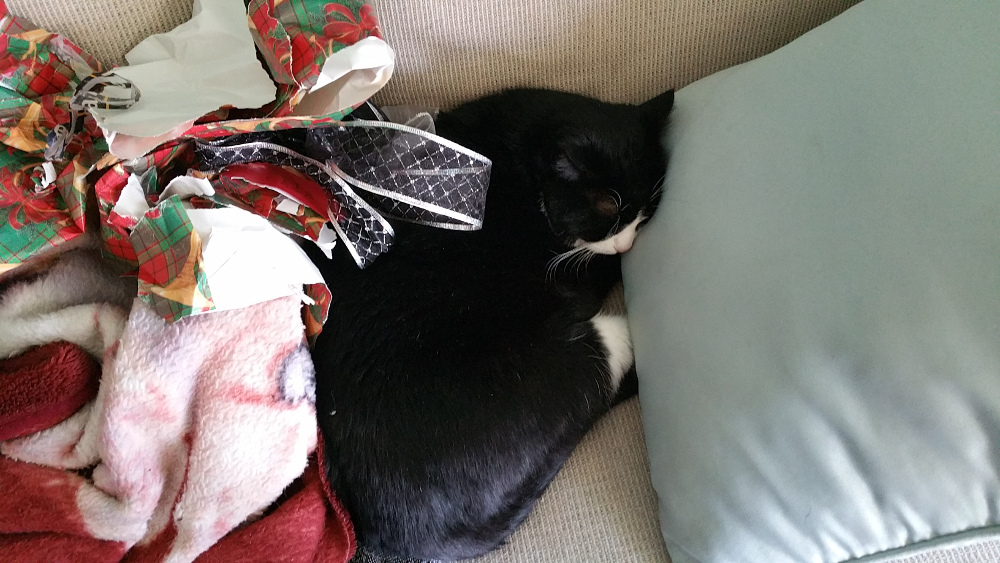 Mr. Magoo: like the cartoon character, his eyes are almost always closed. 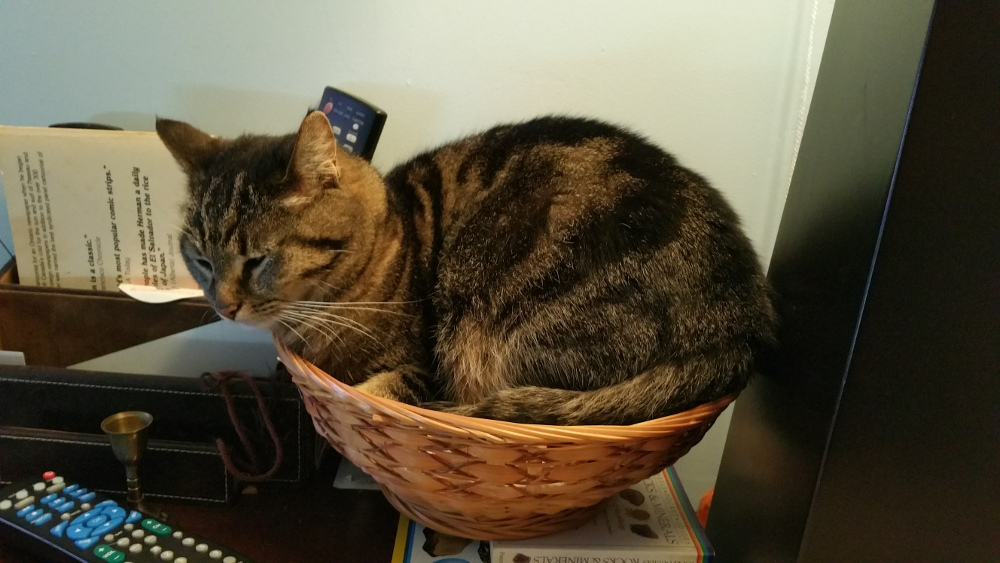 Pepper: hellion in a hand basket.

When I met James I didn’t just get one kayaking partner, I got two! He insisted his little Chihuahua, Chloe, had to come with us. We even bought a tandem kayak with a special seat for her! When I was first introduced to Chloe, with her big eyes and big pointy ears, I gave her the nick-name “Ferbie.” I have to admit, though I am an avid dog lover, I wasn’t crazy about Chihuahuas. When I was a kid, my cousins had a Chihuahua that wasn’t very friendly. Plus, Chloe didn’t have a lot of fur and had funny big ears and a little curled up nose that made her look like a bat. It wasn’t long, though, before she became the cutest dog in the world to me! She is not so much a dog, but more like a human child. She can sit in our laps and be carried around like a baby. She is hungry for attention, is prone to jealousy, hides behind us whenever she is scared and is psychically tuned to our moods. Since James and I are past the age for having babies, Chloe has become our baby. Some words in English she knows very well are “walk” and, especially, “car ride,” and lately, “kayak” to which she responds by pointing her ears up like a couple of antennae and tilting her head inquisitively. When she isn’t walking, car riding or kayaking, she likes to curl up inside a blanket and sleep. She is very skilled at lifting a blanket with her nose, crawling under it and then turning around inside it, making a little mushroom cap shaped tent for herself. Because she has short hair and a Mexican heritage, she is always trying to stay warm. For some reason, she barks whenever the cats try to claw the furniture (even though she has never been trained to do so), earning her the title of “furniture police.” She gets a long fine with the cats and the cats get along fine with her, but only to a point. She has her “personal space.” If the cats get too close, she gives them a little growl. Once Chloe and Mr. Magoo got too close to each other when I was in the kitchen and it produced the strangest combination cat/Chihuahua noise I ever heard! Once Pepper tried to lie across Chloe, but Chloe let her know in no uncertain terms that she was not a cat bed! Lately, however, I’ve noticed Chloe allowing the cats get close enough to her so that they are almost snuggling. Although she is smaller than one of our cats, Chloe thinks she is a guard dog. The pint sized pooch barks at anyone who walks by with real guard dog authority, making the perceived intruders laugh hysterically.

So we are fifty-something new kayakers with a Chihuahua set out to explore our incredibly beautiful back yard. Since writing is my thing, I thought I’d share our experiences with you, perhaps giving you some ideas for your own out-of-the-way vacation adventures. Although tourism is not without an environmental impact, I believe that getting to know all these beautiful nooks and crannies that exist in nature can teach us more respect and reverence for Mother Earth, and make us more inclined to take better care of her. Although the real solutions for our environmental problems await us sometime in the future, we need to become familiar with and appreciate the beautiful spiritual domains that exist outside our city limits to get the process started.

I think there are more tourist gems in our country than the general population is aware of. I was a world traveler in my younger days, traveling to China, Japan, Mexico, the US and Europe. I’ve met countless people from these crowded polluted countries who dream of experiencing the serenity and ruggedness of places like Canada. Never mind oil and gas. I think the millions of square kilometres of our relatively untouched nature are our most viable economic resource.

The entries into this blog of our 2015 kayaking trips will be entered in belatedly. I kept notes of our kayaking, but we faced a bit of a learning curve when it came to making a blog. After some research, and help form my computer programmer son, we got it figured out. Once we get caught up and submit all of our 2015 stories, we hope to add future entires shortly after each of our expeditions.

For our first official kayaking trip, we decided on Link River and Alice Lake. Because...